Adventures of Canoe and Co!

After looking at the world map, there's not much to explore yet. I'm going to check out the forest and cave and see what's what.

Alright northern most small cave (NE of Mount Gulg)... some guy/girl informs me "Lu...pa...gamhi...dho?" Yes, quite. Ah, there's a six headed dragon that "resonates with the eerie howling of wind..." Another optional dungeon to unlock!

Southern cave leads to the Cavern of Ice! Let's check Mount Gulg first just in case there's a quest to lead me here.

Err... ignore that. You have to walk on the lava and it really doesn't hurt that much. B2!

Top left has a Flame Shield and Icebrand. That sounds convenient! 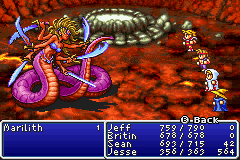 Fire Crystal is ours!! 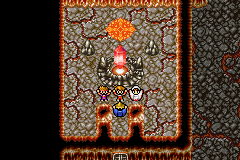 Teleport and then canoe back to Crystal Lake for a little R&R.

It showed I opened up the fire crystal optional dungeon but I'm not sure where that is. Nothing else really opened up so I'll head to the Cavern of Ice! Next time... 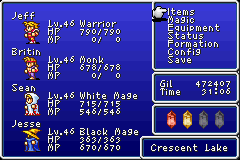